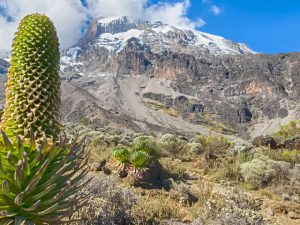 Kilimanjaro is the tallest freestanding mountain in the world, one of the highest volcanoes and Africa’s highest mountain, reaching 5,895m (~19,345ft). Kili has been summitted by a 5 year old, an 87 year old, several quadriplegics and amputees. It has been climbed from the park boundary to the summit in under 5 hours! Situated inside the Kilimanjaro National Park of Tanzania, Kili is one the world’s most popular climbs and is generally a yearly host to climbers with a range of ages and levels of experience across the six hiking routes.

The British founders of Team Kilimanjaro climbed in several mountain ranges throughout the world before deciding to concentrate their principal efforts on Kilimanjaro. There are many good reasons for their choice that will be obvious to anyone apprised of any Mount Kilimanjaro facts or who has been privileged enough to spend time in the Kilimanjaro region.

Surprisingly, many people still believe that Mount Kilimanjaro is in Kenya. While it is possible that this belief has come about because many Kenya guide books or promotional posters show what is perhaps the best long distance view of Kilimanjaro taken from within the relatively nearby Amboseli National Park in Kenya, on the northern side of Kilimanjaro, nonetheless the entire park boundary that demarcates the mountain’s official edges does indeed lie within Tanzania.

How High is Mount Kilimanjaro?

There has been quite a lot of debate about the actual height of Kilimanjaro. The altitude measurement and therefore the official elevation that the Tanzanian authorities quote is that concluded by the 1952 survey that used Wild T2 theodolites and calculated a height for Kilimanjaro’s summit of 5895 metres above mean sea level. However, using more high-precision Leica Geosystems survey equipment, the 1999 survey team calculated Kilimanjaro’s altitudes as follows:

The Exact Height of Kilimanjaro is 5893m

All this being said, when using a modern GPS that approximates the geoid globally, you can likely expect your GPS to tell you that the elevation of Kilimanjaro is 5895 metres. This was tested very thoroughly, so when a Swiss team of map makers produced what is believed to still be the best available topographical map of Kilimanjaro, the data was observed carefully over a period of 17 minutes and fluctuated only between 5894 and 5895 metres. 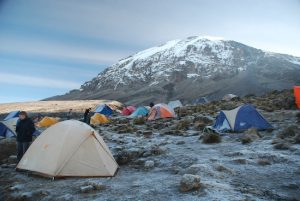 Where Will We Be Staying?

What training is required?

What is and isn’t included in the costs?

Economy flights, on-mountain accommodation (camping twin share), African transfers, tour guide and all meals on the mountain are included in the tour.

Participants should budget to spend $30-$40USD per day on the tour to cover additional food and refreshments on the mountain.

Travel insurance, alcohol, and equipment such as sleeping bags, warm jackets etc are also not included in the tour cost.

How Long Does it Take to Climb Kilimanjaro?

This is a hotly contested question. The simple answer is we recommend that if you want to enjoy your climb and haven’t recently been above 4,000 metres within the last fortnight, and want to summit, you should allow yourself 7 days for the ascent and descent.

The Royal Geographic Society states that it is not safe to obtain more than 300 vertical metres of elevation in any 24 hour period, and that at each successive vertical kilometre one should rest for an additional 24 hours. By this advice one should not attempt to ascend Kilimanjaro within fewer than 10 days.

Conversely, John Rees-Evans argues that prolonged exposure to high altitude has a deleterious effect and that there is therefore an optimum amount of time one should spend climbing Kilimanjaro that lies halfway between the minimum time within which one can gain adequate acclimatization to ensure safe summit access, and the minimum time after which evidence of enduring physiological malfunction is suffered. In Rees-Evans’ experience of overseeing in excess of 15,000 people in reaching Kilimanjaro’s summit, John argues that 5 and half days for the ascent is optimal.

To demonstrate the body’s ability to cope for very short periods at high altitude prior to obtaining acclimatization, John Rees-Evans has summitted Kilimanjaro from the park gate in 10 hours 25 minutes unacclimatized, and his wife, Rebecca has summitted in 13 hours 16 minutes, also unacclimatized. Their entire family has summitted together in 3 and a half days, including their son Bran who was only 5 years old at the time. However, in the case of the family, they had all climbed Mount Meru the week before and obtained a level of acclimatisation which meant that they were comfortable at 4,000 metres, and in the case of the single day ascents, John and Rebecca had made arrangements for rapid descent in the event that they succumbed to severe AMS during their ascent.

While attempted informally from as early as the 1960s by British ex-patriots who lived and worked near to Kilimanjaro, speed climbs on Kilimanjaro have been attempted frequently over the last few years with the feat now having been completed in just 4 hours 56 minutes by Karl Egloff on 13th August 2014. Karl rested 3 minutes on the summit and then ran down to the park gate in 1 hour 42 minutes, making his round trip time 6 hours 42 minutes, some 32 minutes faster than Kilian Jornet.

Until 2011, the fastest woman to climb Kilimanjaro was Rebecca Rees-Evans, who was the very first woman to attempt to run up Kilimanjaro in just one day. She ascended in 13 hours 16 minutes and 37 seconds on 21st May 2005. Her record lasted more than 6 years until Debbie Bachmann, a Kilimanjaro group leader, summitted in 11 hours and 51 minutes. While Rebecca’s time remains the fastest unacclimatised time, there have been many impressive supported speed climbs by women in recent years. The fastest supported, acclimatised time now stands at just 8 hours 32 minutes. Anne-Marie Flammersfeld completed this attempt on 27th July 2015. Interestingly, while Karl Egloff is half Ecuadorian, his father was a Swiss mountain guide. And since Anne-Marie is also Swiss, this now means that both male and female Kilimanjaro speed records are currently held by Swiss nationals, as at May 2016. Kilimanjaro is managed by KINAPA, (Kilimanjaro National Park Authority), whose headquarters is at the Marangu Gate, from where all climbs on the Marangu Route begin and end, and where Rongai Route and TK Rongai climbs are registered and end. KINAPA reports directly to Tanzania National Parks Authority, or TANAPA, whose offices are in Arusha, and mainly comprises administrators and conservationists. While there are no mountaineers employed by KINAPA, they nonetheless frequently work with externally subcontracted East African mountaineers such as Willy Shikuku in Kenya, when it is necessary to be able to consult on matters of mountain safety or to obtain expert perspectives on route selection.

The access to both wildlife and mountaineering expertise that the park authorities enjoy mean that Kilimanjaro National Park is bearing up reasonably well against the threats against its sustainability, as well as managing the ongoing challenge of facilitating the safe movement of climbers along six trails and their many variants, and up three assault routes.